SweetWater was one of the first Southern breweries to start getting their small batches up above the Mason-Dixon. Their 420 is fairly ubiquitous and was a staple at most beer bars in the last 10 years. I digress.

The pour is active and hazy – bottle-conditioning will do that to a brew – and a copper penny color sits in the dense middle while the out edges of the glass shine like polished amber. A fluffy white head holds up nicely as the active yeast keeps doing its work. It’s a treat to have a bottle-conditioned beer at the right time.

The nose is heavy on grapefruit with a vegetal zest smelling sort of the way radishes taste. It sounds weird but you know what I mean.
The mouthfeel is very even and balanced – exceptionally so. Nothing is out of place. There’s enough malt to cover the palate and some peppery sparkle on the tip of the tongue while the hops hit their high notes on the sides.
Certainly it is a citrus-forward brew, but it is tempered by Chinook pine which adds earthiness to the high-flying grapefruit flavor. This is not nearly the “mammoth” IPA the label claims it is but it’s a damn fine beer and, in my opinion, outranks their flagship 420.

Posted in Beer Review, Georgia, IPA, Strong to Quite Strong, U.S. and A

Tagged Beer Review, Georgia, IPA, Strong to Quite Strong, u. s. and a.

Shiner has been marketing their new IPA and it’s about time, too. MOST of what Shiner (Spoetzl) does is great. I’m still not sold on Cheer…

This one pours livelier than most Shiners do; with some help, I kicked up a clean white head with fine lace. The color is red oak and copper straw, with excellent clarity (another Shiner staple) and a steady column of medium bubbles holding the head.

The nose is hop forward – wet grass and leaves, with a squeeze of lemon.

The mouthful is not huge but it’s even, using the effervescence well to coat your mouth. There’s a bit of an odd phenol tang, but that ignites slowly into a crisp grapefruit snap that is woodier than you might expect from an IPA. The finish sits for a moment to let you consider it, before disappearing in a haze of citric cream and just the mellow eat ember of alcohol.

At 6.0, it’s not a palate-wrecker, which I’m always game for. As always, Shiner makes a good, workingman beer. It’s pretty straight-forward, and it’s not changing any definitions of the style, but it’s good and it’s interesting and cheap enough to be worth it.

Posted in Beer Review, IPA, Texas, U.S. and A, Uncategorized

Oktoberfest
Get excited about this one. Sierra Nevada and Riegele have teamed up for an Oktoberfest beer which they’ve been touting for a while. Sierra has never made a bad beer and Riegele is one of the best German houses that is not often seen Stateside. 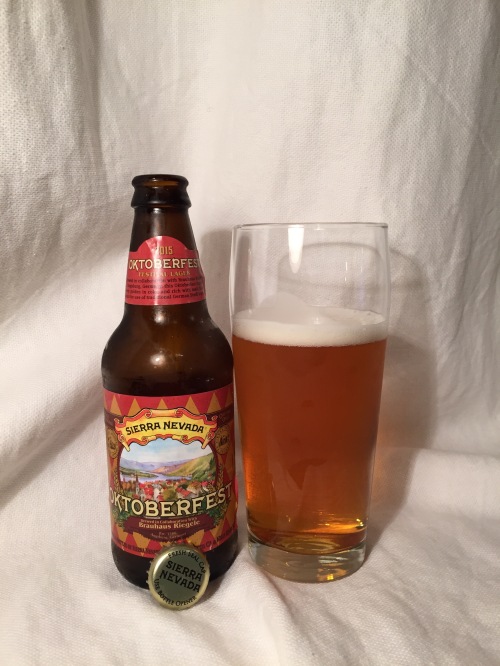 The nose is more Riegele than Sierra, but as a fest beer, that’s a good thing. Some sweet biscuit notes and not a lot of hop to start. However, a faint Noble grassiness lurks in there somewhere.

The mouthfeel is as expected – full with no cloying. That delicate effervescence is perfect, exciting the palate without overwhelming the senses; it carries the flavor gently. A touch of honey and lemon hit first but even out with some chewy bagel breadiness that turns crispy before rounding out with a flicker of cut grass that finishes with that lemon that kicked things off.

You won’t find a better fest beer made here. Coinciding with the start of football season, this beer makes the departure of summer bearable.

Session IPA
The name was too apt not to try; having slacked off for 692 days, I’m in need of inspiration. The stylized geometric Lebowski on the can helps too.

Crystal clear golden straw color with a crackling snow white head. Fine pearl strands wind up the glass keeping the froth rocky. The nose is fresh cut sativa and grass, with a touch of over-ripe orange. The mouthfeel starts with that effervescence skittering across the palate, opens up wide, then thins out in a wave of bitters. The flavor starts tart and citrus, blending and evening out a bit before dissipating into a slightly vegetal tang. A few more sips help even things out and the bubbles take on a hand-pulled quality. It’s a good session beer albeit one that tries to clone the effect of an IPA rather than settle for its own profile. Sessions have become their own thing, mimicking English cask pales more than their overblown American counterparts. This one abides.

Holy hell, it has been too long. I am back, I swear it. It’s not that I haven’t been drinking – I have! A lot! As much as I can. Inspiration struck the other night, and a bomber of this stuff in the fridge was just calling to me. “Open me,” it said. “Drink me, and enjoy. But share it with the world. With all your countless fans.”

This beer lets in no light, save for what trickles in from the top as the honey-colored head subsides. All but black, the muddy brown curtain obscures any view of the gentle carbonation.

A few of these and you’ll need to be carried.

The nose has caramel, milk chocolate, and the cold smell of a concrete floor – like a garage or basement that has been cleaned but is perpetually damp. Some minor vegetal aromas appear, but are overpowered by the cool sweetness.

The first sip starts smoothly, with very little carbonation. There is a softness, but no coating of the mouth or acrid bitterness from the toasted grains. The sides of the tongue get touched with some sparkling but evanescent green hop bitterness, but everything gets ironed out to the back of the palate with chocolate milk, sourdough, and a touch of mocha.

I may have served the first pour a bit too cold, but it’s an easy drinker and a smooth 6.2 percent, which lacks any of the roasted char and sticky alcohol apparent in so many bulkier US porters.

Posted in Beer Review, Massachusetts, New Brew, Porter, Strong to Quite Strong, U.S. and A

I don’t usually include the ABV or IBU, but since they are so keen to include it on the can (along with SRM, no less), I figured I’d add it. Six Point has found their stride with recipes, and with their new can design branding, it looks good too.

The pour is surprisingly quiet though with a little help, a frothy faintly beige head emerges, maintaining at a half inch.

The clarity is low, but the beer is murky, not opaque. Reddish-brown mahogany and cherry wood colors predominate, letting some amber light through. It’s basically like an Irish setter, but it smells better.

The nose has a heavy wort grain aroma – rich and oaty with a bitter pop like an ESB. That segues into the hops, which are resinous and herbal, but not overly floral. The mouthfeel is good (though I think I poured this particular can when it was too cold). The woodsy hop character shows up gradually atop the palate, spreading outward with peppery rye and some clean lemongrass. A green apple skin tartness is accompanied by brown sugar maltiness.

The beer never cloys, but the finish has a slightly dank cling that hopheads and ale lovers will recognize and adore. The rye is relatively quiet, so it comes across more as an APA – and a good one – but I was expecting just a little more twang from the malt.

Posted in Ale, Beer Review, New York, Rye, Strong to Quite Strong, U.S. and A

This review is a few months old, but WordPress has been jamming me by not allowing me to upload photos, but it looks like we’re back. That said, I had to put the image at the bottom of the review and not in it’s customary left-or-right-of-the-color-description spot. It’s summer and I plan on drinking a lot of beer, so reviews should reappear with some regularity. Thanks for visiting, come back soon.

White Birch takes some chances, making small-batch brews with a wide variety of additional ingredients. They also take great pains to make sure you know exactly what you’re drinking, indicating, month and year of inception, and batch number of your beer. Once again, my beer hoarding has gotten the better of me as this beer was brewed March 2011 and, according to the bottle, “is not intended for cellaring”. As I recall, I bought this in August, so a few months shouldn’t be a huge deal.

Right from the get-go, you can tell there’s nothing decrepit about this beer. The carbonation is lively and crisp as an egg-shell white head rises up and crackles over crystal clear clarity. Very fine bubbles travel languidly up the glass, as though they’re stopping to enjoy the sunset-orange color of the ale.

The aroma is an interesting mix – the strong citrus aromas from the Cascade and Centennial hops take on a slight funk from the Belgian yeast, mixing to make an aroma that wavers between wet horse and cooked wild rice.

The mouthfeel is full, starting tart but slowing down a bit. Initially, the lemon, grapefruit, and pine bark flavors from the West Coast hops kick in on the sides of the tongue, traveling backwards with a small dose of whole grain bread bittiness which is really nice. Just when you think it’s a miniature hop-bomb, those grains flavors emerge at the back of the swallow as rye and caraway seed.

Almost no heat from the relatively high (6.5%) ABV, but this particular bottle probably calmed down a bit over the last year. I’ll have to give some fresh White Birch another try, but the addition of the cooked grain bitterness on top of the hops is awesome.